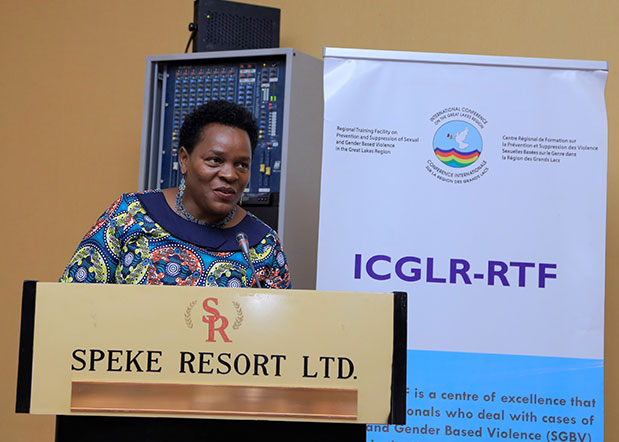 “Sexual and Gender Based Violence is one of the biggest wars that we have today in the Great Lakes Region,” Uganda’s State Minister for Gender and Culture- Peace Mutuuzo told a Regional Symposium on the best practices to combat SGBV in the Great Lakes region on Thursday December 12, 2019. The three days’ symposium at the Speke Resort- Munyonyo, Kampala brought together SGBV experts from all the International Conference on the Great Lakes Region (ICGLR) member States as well as specialists from different development agencies.

While closing the symposium, Minister Mutuuzo noted that “SGBV, corruption and theft are still some of the biggest wars the Great Lakes Region countries are facing and must work together to win.” According to the Minister, the Great Lakes region has had a history of SGBV and this has had far reaching consequences. “GBV reinforces and deepens inequalities between men and women, girls and boys and compromises the health, dignity and security of those affected,” she elaborated adding that “GBV occurs in the households and families (domestic violence), in the community, at work places, in schools and institutions as well as situations of armed conflicts.”

To the Minister, this crime has physical, sexual and mental health consequences to those affected and it also has wide implications for the economic and social wellbeing of families and communities.  Despite the prevalence of SGBV cases in the Great Lakes Region Countries, Minister Mutuuzo expressed optimism in ending this violation of human rights.

In her elaborate speech the Minister applauded all the efforts in place in different Great Lakes Countries to combat and suppress the crime of SGBV. “There is commitment. There is work that has been done. There is much that has been achieved but also there is much more to do,” she explained adding that Regional Countries must now use what is available to create the desired change. Using an example of Jesus who used what was available (5 loaves of bread and two fish) to feed multitudes at a wedding in Capernaum in Galilee, Minister Mutuuzo implored all ICGLR Member states to use the available SGBV prevention experts, the laws, the institutions, the commitments and good will to strengthen the fight against SGBV and eliminate it for the future generation.

As far as strengthening the fight against SGBV is concerned, Minister Mutuuzo underscored the need to among others involve men at all levels starting from the household and family, to the community and policy making level because they have the power to make society better for women and girls.

Particularly, the Minister rooted for; male heads of households and heads of institutions to protect people under their care equally without discrimination, families to socialize all children; girls and boys from an early age for peaceful co-existence and respecting the rights of women and girls as well as policy makers of whom the majority are men, to put in place mechanisms to end gender based violence not only at the work place, but also in communities.

Also, the Minister highlighted the need for men and boys in the country to demonstrate solidarity with women and girls to eliminate gender based violence. From the social perspective, Minister Mutuuzo also wants to see Cultural and religious leaders denounce cultural practices and norms that discriminate against women and girls in particular female genital mutilation, child marriage, bride price, widow inheritance and dis- inheritance in the Great Lakes Region. The symposium came at the end of the 16 Days of activism against Gender Based Violence while its commencement was on the International Human Rights Day.

The Heads of State and Government of the International Conference on the Great Lakes Region (ICGLR), meeting in Brazzaville,... read more

The International Conference for the Great Lakes Region Regional Training Facility (ICGLR – RTF) with support from the African... read more