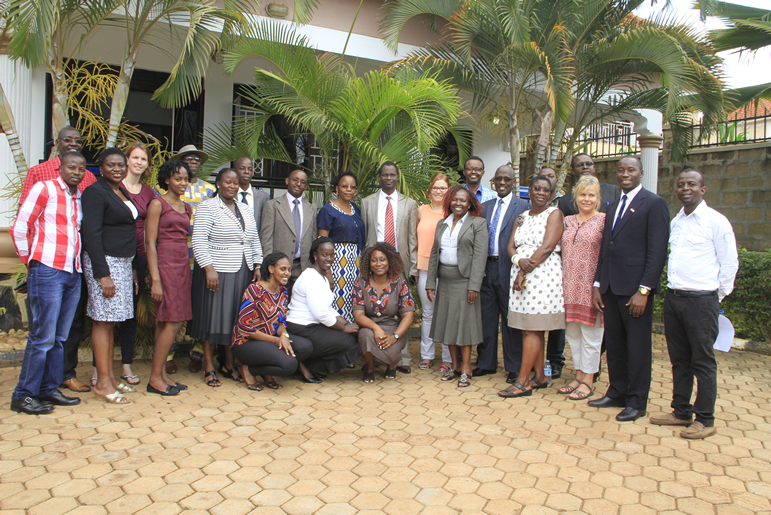 (10 October 2017) –The ICGLR-Regional Training Facility (RTF) is conducting a training workshop for the Master Trainers (MTs) in the prevention and suppression of Sexual and Gender Based Violence (SGBV) in the Great Lakes Region (GLR) from 9-14th October 2017 at the newly acquired RTF office in Munyonyo, Kampala-Uganda.

The RTF conducted the first training earlier this year from 8-12th may 2017. This focused on the introduction of MTs to the RTF-GLR-SGBV training programme & roles and responsibilities.

The 12 RTF Master Trainers will train about 96 National Trainers from the 12 member states of the International Conference of the Great Lakes Region (ICGLR). Thereafter, these 96 National Trainers will train around 1,000 professionals: police officers, judicial officers, and medical officers, psycho-social workers and other categories of persons who handle cases of sexual violence in the Great Lakes Region (2018 and 2019). The fight against SGBV is the basis for ICGLR-RTF’s mandate.

This training is supported by World Bank and The Netherlands Initiative for Capacity development in Higher Education (NICHE) in partnership with Maastricht School of Management (MSM), Living Peace Institute and Rutgers.

According to Mr. Nathan M Byamukama, the Acting Director of the RTF, this training will focus on progress made by MTs in conducting formative research in their respective countries, which will inform the development of training curricular for all the stakeholders (police officers, judicial officers, medical officers, psycho-social workers, and other categories of persons who handle cases of sexual violence in the Great Lakes Region.

The NICHE project is aimed at Institutional strengthening of the Regional Training Facility (RTF) to deliver training programmes in the prevention and mitigation of Sexual and Gender Based Violence. By the end of this project, it is expected that:

RTF has an overview of the ‘expert circle’ of existing training institutions and other relevant stakeholders, Trainers and professionals have access to an e-learning portal, RTF fulfils an advisory role in the Great Lakes Region on SGBV, MTs and national trainers are capable of doing formative research. An online knowledge platform is created where best practices and research results are shared.

RTF has a core team of 12 Master Trainers (MTs). MTs will have trained 96 national trainers on SGBV in 12 countries. Course curricula and training materials are developed. About 1,000 professionals (police, judicial, medical, social) will have been trained to better address/prevent cases of SGBV. RTF has a database through which existing courses are monitored and evaluated.

RTF has already procured a new office building to host staff and this training is being conducted at the RTF new office in Munyonyo. Within budget limits, remodelling on the new office will be done and RTF will acquire other resources that contribute to becoming the centre of excellence in the Great Lakes Region in the fight against Sexual and Gender Based Violence (SGBV).

At the end of the project, RTF will have the professional and organisational capacity to: develop, implement and maintain course curricula and training materials on a regional level in SGBV for police officers, judicial officers, medical workers and psychosocial professionals, establish and implement a regional SGBV knowledge and training network that facilitates regional collaboration in the prevention and mitigation of SGBV cases in the 12 member states of the ICGLR.

The ICGLR Heads of State and Government committed to eradicate all forms of Sexual and Gender Based Violence (SGBV)... read more

The Heads of State and Government of the International Conference on the Great Lakes Region (ICGLR), meeting in Brazzaville,... read more

The International Conference for the Great Lakes Region Regional Training Facility (ICGLR – RTF) with support from the African... read more