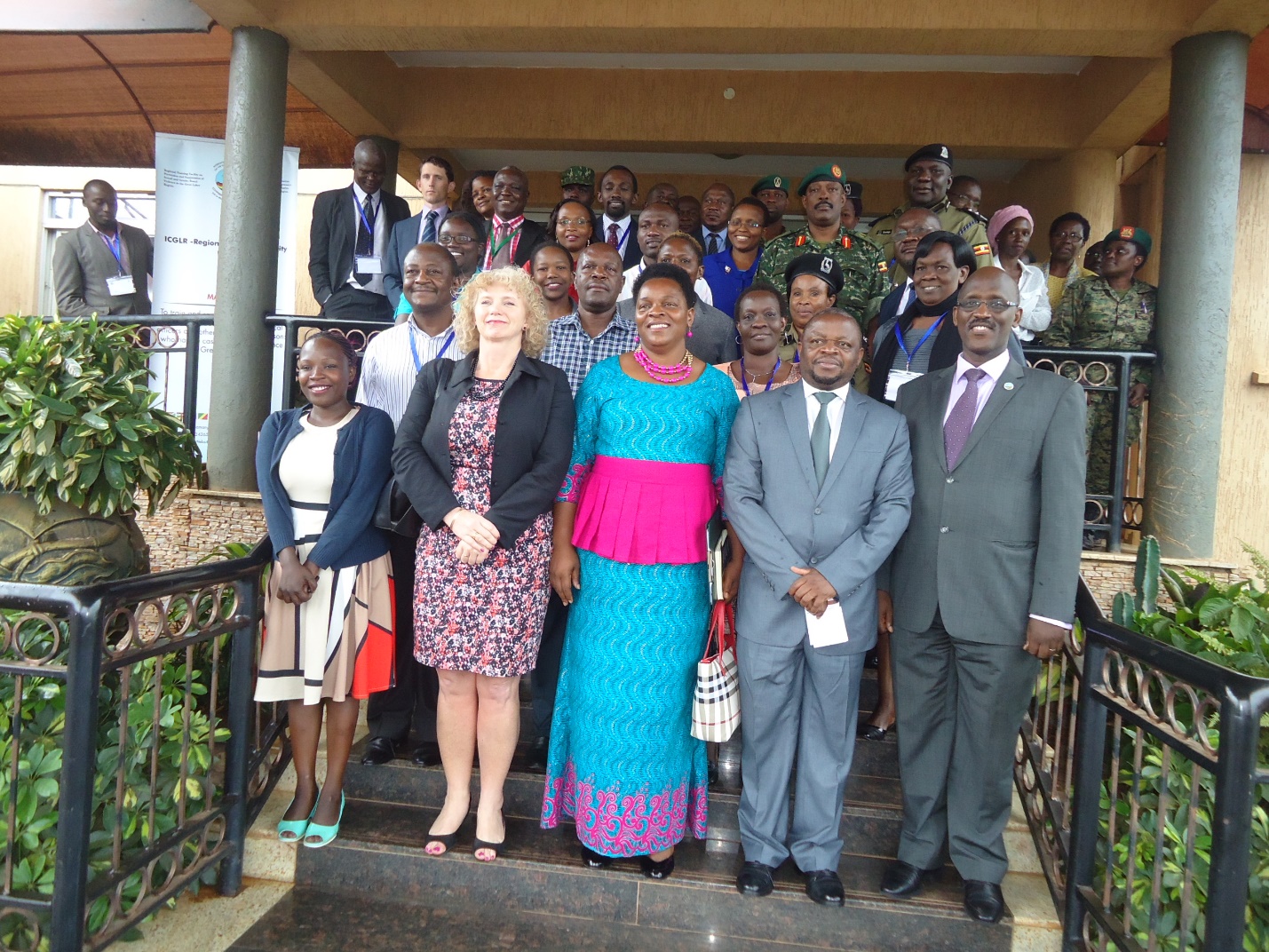 Major Observations: Lessons Learnt and training needs from the Workshop.

The closing ceremony was presided over by Lady Justice of the Supreme Court, Professor Lillian Tibatemwa-Ekirikubinza, Head of political Section-British High Commission, Mr. Joseph Bolton and Ag. Director ICGLR-Regional Training Facility, Mr. Nathan M Byamukama. Commissioner of Police, Mr. Fred Enanga gave a vote of thanks. Certificates of attendance were also given out to participants who had successfully completed the training.

The closing ceremony was presided over by the Hon. Justice Lillian Tibatemwa Ekirikubinza (JSC), who also handed out certificates of attendance to the participants. Also present at the closing ceremony was Mr. Joseph Bolton, representing the British High Commissioner to Uganda, and Mr. Nathan Mwesigye Byamukama, the Ag. Director of ICGLR Regional Training Facility.

Mr. Fred Enanga of the Uganda Police Force, speaking at the closing ceremony thanked the organisers, the British High Commission and the hotel staff for making the training a successful and memorable experience. He stated that this training workshop had been a great learning opportunity for all the participants and expressed hope that similar training would be organised in the future.

Mr. Byamukama thanked the participants for the two days of very serious engagement, especially those that travelled long distances to attend the workshop. He was grateful to the judges for sparing their precious time to participate in this workshop. He also thanked the UPDF, the media and civil society for joining hands with the ICGLR RTF to tackle the problem of SGBV. He informed the meeting that ICGLR is a regional organisation whose mandate is contained in its protocol.

Mr. Bolton said the British High Commissioner had asked him to thank the organisers of the training. He observed that sexual violence exacerbates conflict and that while Uganda had no conflict, the great lakes region was still affected by it. The duty of the armed forces, he said, was to provide an environment in which sexual violence offences can be dealt with, if they occur. He also mentioned that the workshop was part of on-going efforts by the British High Commission to deal with sexual violence.

Justice Ekirikubinza thanked the British High Commission for their support and the ICGLR for knowing who to choose in inviting the participants, which ensure the meeting was a success and the effort well worth it. She thanked the facilitator, Ms. Florence Butegwa, for facilitating the workshop very well.

She pledged to take a report of the workshop to the Chief Justice.