Wednesday, 7th January 2015, the Special Envoy of the United Nations Secretary General to the Great Lakes Region, Amb. Said Djinnit paid a courtesy call to the Ag. Director of the Kampala based Regional Training Facility (RTF) on Prevention of Sexual Gender Based Violence, Mr. Nathan Mwesigye Byamukama.  Amb. Djinnit replaced Mrs. Mary Robinson who had served for 18 months in the same capacity.

Mr. Byamukama informed the Special Envoy that the RTF was an institution of the International Conference on the Great Lakes Region (ICGLR) and was responsible for training judicial officers, medical officers, social workers and police officers and others who handle cases of sexual violence from the 12 member states of the ICGLR. He thanked the Special Envoy for prioritizing support to the operationalization of the Regional Training Facility (RTF) and looked forward to more cooperation in 2015. He informed the Envoy that the Government of Uganda was very supportive to the RTF and that the Uganda Inspector General of Police, Gen. Kale Kayihura, pledged further support, in December last year by offering 5 acres of land for the RTF to construct its headquarters.
This pledge was made during the first training of the police from the Region in Forensic Evidence Management of the SGBV cases that took place in Uganda on 10th December 2014. He informed him that 2015 will see development of training materials, training curriculum and identification of trainers for police, judicial officers, and medical officers and social workers. He also reported that the World Bank had provided support to train judicial officers and police for 4 years starting November 2014- June 2018.

On his part, the Special Envoy reiterated his office’s support to the RTF and indicated that he would do everything possible in his powers to support the RTF so that it performs is work effectively and efficiently. “I come to show my support to the Centre and express my readiness to cooperate with them”, he stated.

The Great Lakes Region has not only been notorious for conflicts but the women in the region have suffered the effects of the conflicts with violence against women topping the list of human rights violations in conflicts most of which go unpunished. The RTF will contribute to fighting impunity of these crimes. 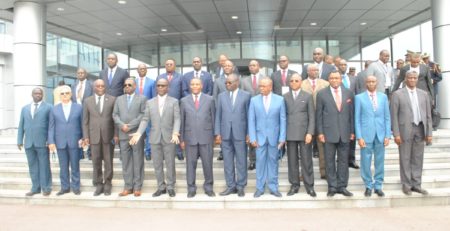 Working with the Police Sector to Meet the Needs of Sexual Violence Survivors in the Great Lakes Region Click here... read more